Posted on December 18, 2014 by Bonnie Cehovet
Keep on Stepping
Note: This is a sharing of Bill Curtis’ Fatback Band newsletter. It is being shard with his permission.

orking. I know you are saying well Bill isn’t it time for you to sit back? Music is my passion, and as long as I’m able I will be out there doing it! I think every musician know when it time. Right now, I feel like I have about twenty more albums in me, as a matter of fact, I know I do. They’re just waiting to bust out. On the real side, I love what I do and I’m thankful and gratefully blessed to be able to play and perform as long as I have. And to you guys out there, who have supported us over the many years…God Bless you and Happy Holidays.

Fatback asked the question back in the 80’s, “Is This the Future”, a song we recorded. Well this is the future and we are not going back. You might as well make up your mind to join the revolution and if not, you’ll be like the buffalo extinct. It has been over twenty years and if you haven’t gotten the message by now you never will.

I know I was one those out there bitchin how they have dumb down our music and made it like water and the music industry sold the artist out. Are we getting a fair shake now? No; by no means. What we have out there now are people controlling music that have no passion for music and you as an artist.

This is the age of technology. Either you keep up or you’ll be left by the way side. This is a right now generation. A generation that gets tired of things very quickly, a generation looking for the next big thing, a generation that want to be in the mix and want everything on demand. But if you create something great they will blow it up instantly for two months. You’re only as big as your last hit and that only lasts for about two months. This is the kind of world we are living in now. 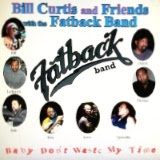 The public is hungry for new stuff, not just any old stuff, but great music they can relate to. But they don’t know what they want until they hear it and now there lies the trick… how to get your music heard. Like I said this is the future, from Cassettes to Cd’s to download and now Steaming. From this generation on, they will never really own music; albums will be a thing of the past. What I mean is; you want go in a person home and see albums any more, your music will be in the clouds, Just like leasing a car. I could go on and on about the new world that I see ahead, but I just want you to know its here now and it every man for himself. You either in or you’re out and if you out don’t bitch, only means you’re not good enough. Look for something new to do, find another way to sell your music! Just don’t stay in that hole bitching, because nobody gives a damn. You got to keep on stepping brother.

Hey don’t take it personal! I’m talking to you old guys that don’t know how to use a computer, don’t own cell phone and don’t have a website. The one’s not familiar Tunecore, CD baby, Spotify, You Tube, Facebook & Twitter. I’m not saying they are the answer, but it’s the way of the world.

Music will bounce back, I know it will but not until the artist wakes up and realize he has power and start controlling his own rights. Music is still king if you don’t believe it, just imagine if everyone removed their music from Spotify, itune, Pandora, etc. All of those companies that are using music are making a fortune and paying back pennies to the artists. They would be out of business and they wouldn’t have anything to sell. The record companies knew that and they went and got theirs and left ours on the table. Now we got to fight, take a stand for our rights to get a decent return. Don’t let technology take us down without fight.

Bonnie Cehovet is a published writer and professional Tarot reader, residing in the Pacific Southwest.
View all posts by Bonnie Cehovet →
This entry was posted in Bill Curtis Newsletter. Bookmark the permalink.